Look, is it a bird or a plane? No, it is a flying Shark? This video turns the 2013 movie, Sharknado, into real life as this bird carries a baby shark while flying in the air–many of us may agree that 2020 is weird? According to Movie Web‘s latest report, a giant bird with a baby shark was filmed by a woman in South Carolina.

(Photo : David Clode on Unsplash)
Sharks Flew in the Air as A Bird Carries It in This Awesome Video: Check It Out Now!

A woman was able to capture the footage from the 17th floor on her apartment building located at Myrtle Beach, where the incident took place. The video went viral as the people on social media instantly went crazy after watching the footage. The Twitter account @Trackingsharks posted the video of Kelly Burbage on June 30. The caption reads “Anyone know what type of bird this is and is it holding a shark? #myrtlebeach Kelly Burbage”.


Anyone know what type of bird this is and is it holding a shark? #myrtlebeach  Kelly Burbage pic.twitter.com/gc59xihiM7 — Tracking Sharks (@trackingsharks) June 30, 2020

“If 2020 was a nature scene…” said one of the Twitter users when describing the viral footage. The bird watchers on social media identified the giant bird as an osprey, also known as a fish hawk or sea hawk. An osprey is a bird that preys on fish much smaller in size, as explained by the report. The video showed what the bird does best, described by Movie Web. The bird can reach more than 2 feet in length and nearly 6 feet across the wings, making more like a giant raptor.

Shark flew in the air as a bird carries it in this awesome video: Check it out now!

According to Movie Web, there have been debates as to whether or not the giant bird grabbed the small shark from the water after the video was examined. The report claimed that the small fish in the video looks like a baby shark. However, other people believe that the flying shark is a giant Spanish mackerel, which is commonly found in Myrtle Beach waters. 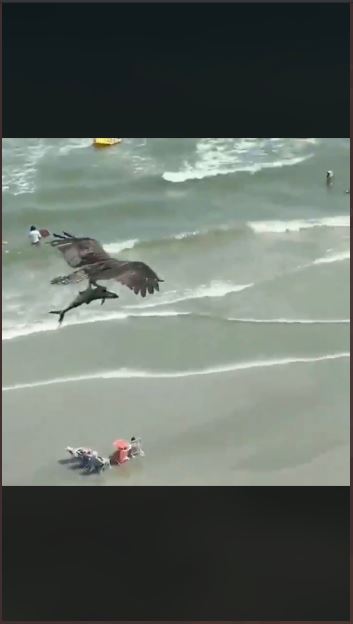 (Photo : Screenshot from Twitter post of @fxco13)
Sharks Flew in the Air as A Bird Carries It in This Awesome Video: Check It Out Now!

Whether or not it is a shark, there are still many individuals who believe that Sharknado is really going to happen in 2020, the report stated. Movie Web also explained that Sharknado coming in real life might be the answer to keeping people away from the beaches this upcoming holiday weekend.

It is advised that people shouldn’t go to the beaches during the ongoing pandemic; officials are now closing the beaches across the nation in order to stop people from gathering in large groups. However, it is still a challenge to keep everyone away from the beaches, even if there are giant birds flying above that could easily drop baby sharks. Sharks falling from the sky are not really needed since the beach is scary enough with hordes of people.

The TourBox adds a touch of tactile control to your editing workflow in a...

A majority of U.S. teens are taking steps to limit smartphone and social media...

Selling on eBay? Use these 5 essential tips and tricks to...

Australians might be spending more time at home in 2020, but that doesn’t seem to have dampened our enthusiasm for shopping – in...