Just like other combat games that use different tactics and strategies, you should win each match to rank up on Valorant. The LOADOUT explained that the game has eight ranking tiers. These are Iron, Bronze, Silver, Gold, Platinum, Diamond, Immortal, and Radiant, and there are three sub-levels in each of the Tier, except for Radiant.

(Photo : Screenshot from Twitter post of @pwneiride)
When and Where to Plant Spike in Valorant: Advanced Gameplay Guide to Rank You Up

If you’re one of the players who’s stuck in bronze, silver, or gold, this advanced gameplay guide will help you bring up your rank–may give you a chance to dominate every game you play. According to PC Invasion, things in Valorant are getting a little more serious, especially now that the Competitive Matchmaking has arrived.

In order for you to rank up, you are going to need some more detailed info about effective playstyles. The advanced tips and tricks which will be provided can be used by any player, regardless of their skill level. If you’re also a fan of other popular games and looking for game tips, check out the game news at TechTimes. Also, here’s a guide on how to assassinate people within a smoke bomb in Ghost of Tsushima.

The previous report of PC Invasion already provided the basic tricks that you need to increase your skill level. This includes using a knife for your character to run faster, just like in Counter-Strike: Global Offensive (CS:GO), Rules of Survival, and other games alike. However, this time, you’ll have a chance to know more advanced tips and tricks that will further improve the way you play on Valorant.

Since rounds in Valorant are usually won and lost in fast-paced around the Spike, you’ll be needing these Spike details to get the job done in the heat of the moment, where bullets are flying in all directions. The Spike will take four seconds to be planted and seven seconds to be defused. 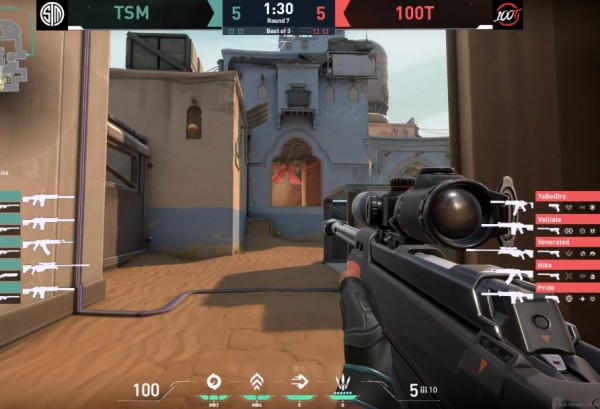 (Photo : Screenshot from Twitter post of @BoBBY_Burnside)
When and Where to Plant Spike in Valorant: Advanced Gameplay Guide to Rank You Up


I’ve been watching a lot of pro Valorant matches this week and wanted to see what it would look like with a CS:GO style overlay. Overall I feel it turned out better than I expected. pic.twitter.com/lJqahIs4Ik — BoBBy (@BoBBy__Burnside) July 26, 2020

There are scenarios where you’ll find yourself with not enough time to defuse or plant it. If that happens, it is suggested that you hide. When the Spike started beeping eight times per second, that’s a sign that you only have five seconds left to defuse it. The bright white ring surrounding the Spike is also an indicator if you have less than five seconds left.

The report also suggested that you should always plant the Spike since it will give you Creds for the following rounds. Before the Spike explodes, you need to run away from it at a distance the same size as your audio ring on the map.

When a player is killed while planting or defusing the Spike, they need to relay the information on their Combat Report so that their teammates will know what type of guns the enemies used, and their remaining health.

If you know that your team will be losing the round, you must pick up a better weapon before the round is over, giving you an advantage for the next match.

Before you start your ranked matches, it is advisable to warm up first in the practice range. YouTube influencer “Click Heads” suggested that a player must practice his shooting accuracy by eliminating the bots while standing, using the first bullet.

Once you get the hang of it, you can level up your practice by moving around while killing the bots. If you are not standing still, your goal should still be to eliminate the bots with the first bullet.

Keep your tabs open at Tech Times for more game guides to enhance your skill and reign victoriously.

Only 13% of the 2.7 billion deskless workers worldwide have paid sick time

GTA 6 news and rumors: when will Grand Theft Auto 6 be announced?

Apple's OS for iPad includes several features that make it easier to use the iPad...